The Foveon X3 direct image sensor is the most advanced color image sensor ever developed. It represents a giant leap forward in color photography and is the only image sensor technology that combines the power of digital with the essence of film.

For over 100 years, color film has traditionally been held as the gold standard for photography. It produces rich, warm tones and incredible color detail that consumers around the world have become accustomed to. Film has achieved this by using three layers of emulsion to capture full color at every point in the image.

Charged Couple Device (CCD) image sensors were developed approximately 30 years ago, ushering in the era of digital photography. Unfortunately, the rich, warm tones and detail of color film that the world came to expect from film based cameras were not achievable with the new digital cameras. This was due to the fact that CCD digital image sensors were only capable of recording just one color at each point in the captured image instead of the full range of colors at each location.

Finally, Foveon has combined the best of what both film and digital have to offer. This is accomplished by the innovative design of the three layer Foveon X3 direct image sensor. Similar to the layers of chemical emulsion used in color film, Foveon X3 image sensors have three layers of pixels. The layers of pixels are embedded in silicon to take advantage of the fact that red, green, and blue light penetrate silicon to different depths ““ forming the first and only image sensor that captures full color at every point in the captured image. 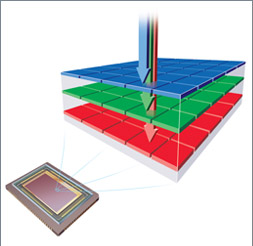 From point-and-shoot digital cameras to high-end professional equipment, Foveon X3 technology offers multiple benefits to consumers and manufacturers alike. At the same time, it opens the door for other innovations, such as new kinds of cameras that record both video and still images without compromising the image quality of either.